Not sure how to play the game? This post will teach you all you need to know about the official rules and best practices of cornhole, also known as bean bag toss. After reading,  you’ll not only know how to play the game, you’ll learn how to master it as well and perhaps you’ll want to pick up some slang. While cornhole has a long history of rules, today most people mainly rely on the official rules set by the American Cornhole Association (ACA) and the American Cornhole Organization (ACO), which vary slightly. We will be covering both rules in this post.

How to Play the Game

Although there are some differences in the equipment and court regulations of the ACA and the ACO, their official rules to play cornhole are basically the same. You can play bean bag toss as one-on-one (singles) or two-on-two (doubles) games.

Each player gets four bean bags to toss, and they pitch at alternate intervals until they have thrown all four bags. This is the end of an inning. They then walk to the other cornhole board and start another inning. The player who scored higher gets to throw first for each inning. If neither player managed to score in the first inning, the player who pitched second gets to start the second inning.

In bean bag toss, your toss can be valued in three ways:

You calculate the total points of both players for one inning. After this, you subtract the smaller score from the higher score. The player that scored higher during that inning is then awarded with the difference in points.

What Counts as a Foul?

In bean bag toss, the following actions are considered a foul:

Now that you know some of the basic rules to play cornhole, let’s take a look at some of the best practices that can help you master the game:

There are several factors to consider when it comes to cornhole equipment standards. These include the size and dimensions of the board, the material, the height, the hole positioning, and more. Let’s take a look at these main factors:

The biggest difference between the official rules of the ACA and ACO is in the layout of the board. Let’s briefly take a look at the specifications by both of these bodies.

These are some of the most important official rules and the basics that you need to know if you’re going to learn how to play cornhole. We’ve also provided you with some essential best practices that can help you improve your play. Now use these tips to practice your bean bag toss and prepare yourself for your next outdoor social event and perhaps even consider buying a set. 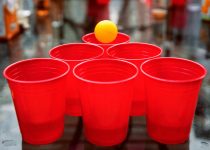