Bocce Ball has been played since the Roman times, and that’s thousands of years where people have gotten together to kick back and enjoy a game. You can bet that even way back then in ancient Italy,  the Romans liked to take a little drink to make their Bocce Ball more interesting.

Drinking games are a great way to make a game like this more fun. Not only will everyone relax and get into the spirit of the game, but the more you drink the the greater the chance of hilarity  as everyone’s aim suffers a little.

If you’re planning an event and you want something to bring people together for a night they won’t forget, the Bocce Ball drinking game is just what you’re looking for. Read on for some suggestions on how to play, starting with that all import Bocce Ball cocktail recipe.

Of course, Bocce Ball isn’t the only game you can play as a drinking game. You could always try Cornhole, we’ve even produced a handy guide for you to do just that.

Yes, you read that right. Bocce Ball has its very own cocktail! If you’ve ever made a Manhattan, then the ingredients will be familiar to you.

A splash of soda water

The almond flavour of the amaretto will set off the tangy citrus nicely, and the Vodka will bring a welcome buzz.

Of course, you don’t have to drink a Bocce Ball while you play. Wine, beer, or any other beverage of your choice will go down just as nicely.

The bocce ball drinking game is played according to the normal rules of bocce ball. The rules to the drinking game are pretty simple, when certain things happen, you take a drink.

Here’s the list of when you should drink – you might want to copy this out and put it where everyone can see, so there’s no confusion.

You could always add your own penalties to this list. Perhaps you take a drink if you don’t hit a ball at all, or if you hit someone else’s ball they have to drink? Why not make it a part of your fun evening, to come up with the best new rule for the Bocce Drinking game! 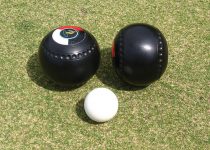 Sarah Dixon is a freelance writer and author who lives in York, England. A Couch to 10K veteran, she takes full advantage of the beautiful Yorkshire countryside to get outside, hiking, geocaching or just playing games with her two children